Novel by James Fogle (Summary from Amazon): This rich and compelling story of four traveling junkies who lives revolve around looting drugstores was made into the movie voted best film of 1989 by the National Society of Film critics and is published here for the first time.

Movie: Screenplay by and directed by Gus Van Sant  :  (Summary from IMDB): A pharmacy-robbing dope fiend and his crew pop pills and evade the law.

Our group (women ages 22-47) pick a book that has been made into a movie. We read the book and then get together for thematic food, to discuss the book, and then to watch the movie. 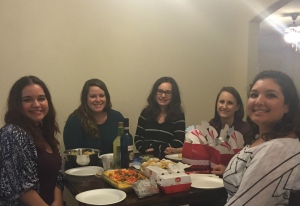 Our group with a table of fun food. (minus me – I took the picture)

Each of us are to bring either a drink, dessert and/or appetizer and it is fun to use the story for inspiration. Below is what we ended up with this month. (A lot of munchies lol)

Thoughts about the Book: I personally liked the book. My individual rating was a 3.5. There was some amusing dark humor and clever shenanigans, and I thought the unique style of writing made the book seem more authentic.

However, the majority of the group didn’t care for it. The biggest complaint was that there were no chapters. And it did jump around a lot and sometimes difficult to keep up because of the head-hopping and sudden scene transitions – or, actually, the lack thereof.

It did stay very close to the book but it left out the wittiness of the narrator, which to me was the entertaining part of the book, and it also missed a couple of key points where if I hadn’t have read the book it would have been confusing. However, I doubt I would have made it that far (if I hadn’t read the book first) because the movie was slow and boring.

Side Note: I thought Dianne from the book was way cooler than the character in the movie.

We were surprised that Natalie was played by Heather Graham.

We weren’t sure how graphic the movie would be because the book had some explicit content – but it was very toned down compared to the book – no nudity and even the adult gibes were omitted.

Before reading the book, some of us knew the actors who played the characters in the movie, so that was how we read them in our heads. For me, Bob was Matt Dillon.

Since it is Christmastime, we had a gift exchange – We each brought our favorite book and exchanged white elephant style. It was interesting having each person describe their pick and why it was one of their favs. I brought “The Haunting on Hill House” and received a coloring book for adults, which is really cool.

Movie: 1.5 glasses of margaritas out of 5

The book is different and there is a huge chance that you’re not going to like it, but I thought it was interesting, maybe not by normal genre standards, but interesting. But I don’t recommend the movie even though it does have Matt Dillon – just put him in your head as you read the book and, there, you have the movie but better.

Next month’s Book and Movie:

East of Eden by John Steinbeck