Psycho: Movie and a Book for August 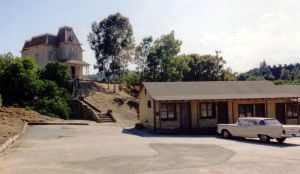 Each month four of us (women ages 20-45) pick a book that has been made into a movie. We read the book and then get together for thematic food and to watch the movie. 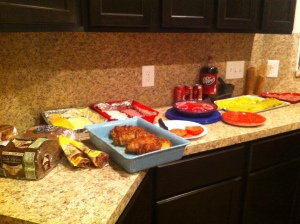 We don’t know what the others are bringing. All we know is our category: appetizer, entrée (2 of us get this), or dessert. We can take food items directly from the book or go more inspirational.  Below is what we ended up with this month.

Entrée: Sandwiches – an assortment of meats and cheeses, sour dough and rye bread.

Entrée: Cheese wrapped baked potatoes that had been cut and sliced.

Before I started reading the book, I already knew the twist (I watched the movie years ago) so there were no big surprises. I really enjoyed Bloch’s writing style. It was easy-going, and he really knows how to set a mood. By far, my favorite scene was the one at the end where Norman Bates (Anthony Perkins) and Sam Loomis (John Gavin) are in the office – this, to me, was worth reading the entire book. The mood shifted and we got to see the darker side of Norman. Also it went from Sam feeling like he had the upper hand – to gradually realizing he did not. What an awesome suspenseful shift in reality.

I found the movie visually outstanding. Hitchcock used textures, lighting, and shading to really enhance the black and white movie.

It was a little slow in the beginning, and we were like, “Get on with it.” But once it did get going, and this might sound strange, the movie ended up being so much fun. We were cracking up laughing at so many of the “scary scenes” and were highly entertained.

While watching the movie, Hitchcock was spotted and so were a lot of birds.

After watching the movie, we discovered something very interesting: Hitchcock actually intended the movie to be a comedy. He really was way before his time; it took a modern audience to really appreciate his sense of humor. Here’s the interview about it:

Hitchcock: Psycho meant to be a comedy

Half of us thought the sister, Lila Crane, played by Vera Miles looked younger than Janet Leigh and the other half thought she looked older.

We all agreed that Norman started out looking kind of cute in the beginning but then by the time we hit the end of the movie he was downright creepy. But Sam was way better looking.

At first I thought the book was better than the movie. I thought Hitchcock left out the most suspenseful scene in the book (my favorite from above)  and wondered why he changed Norman’s appearance. And there were other things, too.  But it makes sense now: the book was horror, the movie was a comedy.

I’m really glad I read the book and watched the movie. If you haven’t watched Psycho in a while, grab a few friends and watch the movie in the frame of mind that you are about to watch a comedy.