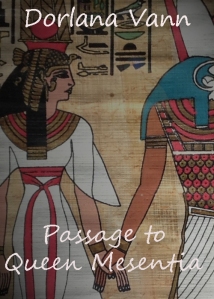 “That was so freaking boring,” Wade Roberts said as he lowered the passenger side window. “Please, don’t ever make me sit through one of those again.” He fought with his tie until he won and then threw it in the backseat.

“Really?” Lilly said. “I found it fascinating. Would you mind? With the window… we still have dinner.”

Wade pressed the button, and the window made its way back up. “That’s because they’re your parents: the greatest archaeology team in the whole universe.” Even though he knew Lilly would freeze in her little sundress, he turned on the air conditioner. She had been the one who had insisted he wear the hot, miserable suit in the first place. He knew the reason he’d been the only one Sunday-schooled up at the lecture was because she wanted to impress her parents. That’s what had annoyed him the most about the entire evening.

“That’s not it,” she said. “I mean, I am proud of them. My goodness, they discovered the tomb of an Egyptian queen who no one even knew existed.”

“It doesn’t even make sense. This cat Unas…”

“The last pharaoh of the fifth dynasty.”

“Yeah, yeah. Why wouldn’t he want anyone to know he had this third wife? It’s not like they had to worry about bigamy. Everyone already knew he had two wives. What’s one more?”

“Oh, so you were paying attention.”

He exhaled, causing his lips to putter, and shrugged his shoulders.

Lilly tucked her long, dark hair behind her ear and her face lit up as she said, “But that’s what makes it so incredible. Don’t you think it’s weird how they found Queen Mesentia’s mummy buried off on its own and not with the other wives? No pyramid or any other indication that there was a tomb, just an underground tunnel.”

“Uh huh. Hey Baby, stop over there at that fillin’ station so I can grab me a pack of cigs.”

“Well, call and tell them we’ll be a little late. Unless you want me to pace and be nervous all night.”

She huffed but pulled off the highway and then into a Texaco station.

Wade got out of the car and took his time walking inside. No way was he going to hurry. He could see Lilly through the window with the phone up to her ear. Probably saying, “Mommy, I’m so sorry Wade’s such an ass.” Actually, he mused, she would never use the word ass, it would be more like, “He’s such a meanie-wienie,” or some other silly word she had picked up from her 3rd graders.

Wade climbed back into the car a couple of minutes later, hitting his cigarettes upside down on the palm of his hand, packing the tobacco.

“I tried them three times,” Lilly said as she drove onto the access road. “I don’t understand why no one answered. Even if they’re upstairs, Constance should answer in the kitchen. ”

When Wade noticed she had turned the air off, he started rolling the window back down.

“You’re not going to smoke that now are you?”

“Uh… yes,” he said with the unlit cigarette already in his lips and his thumb on the lighter.

“What the hell did you think I was going to do with the things? Eat ‘em?”

The tires squealed as she turned into the next driveway and made an abrupt stop.

“What?” His mouth dropped open, and the cigarette fell to the floorboard.

“I’ll wait while you take a couple of puffs. All right? And please, take off your jacket.”

Wade gladly rid himself of the jacket. With the door ajar, he lit the cigarette, inhaling a long satisfying drag.

“We saw them like five seconds ago,” he said, wishing he had a cold beer to go with the nicotine.

“You know how they hate it when I’m late, and we’re already thirty minutes behind.”

“Will you stop? It won’t hurt them to wait a couple of minutes.” He squished the fire of the cigarette out with his fingers and put it back inside the pack. He sighed as he sat back down in the passenger seat, hoping she would catch his annoyance so he wouldn’t have to tell her what he really thought of the situation. Her parents, Mr. and Mrs. Perfection. He didn’t understand why Lilly wasted so much energy on people who would rather be half way across the world digging up bones than near their only daughter. He did hate that they were home, but it would be hard on Lilly to see them go back to Cairo in a month to count, or catalog, or whatever people did with mummies, when she hadn’t seen them in over a year.

As Lilly sat there, all tight mouthed and mad at him, he remembered what he used to call her when they’d first met: Princess Lilly. How someone as classy as Lillian Steward had fallen for a blue-collar cowboy like him, he would never know. Her parents still didn’t approve of him and probably hoped Lilly would grow out of her rebellious behavior and get back together with Mr. Sophisticated. They especially didn’t like them living together without a piece of paper but didn’t want them to get married either. He couldn’t wait for their reactions when she finally did say yes. He had proposed to Lilly twice, and even though she had shot him down both times, he knew one day she would be his wife.

As Lilly turned the wheel and pulled into the circular drive that led up to the four-columned two-story, she said, “Answer my father when he talks to you, don’t be bored, and please don’t fall asleep after we eat.”

“Yes, Miss Steward. I will raise my hand if I have to go to the bathroom.”

“I wonder why the lights are out.” She turned the ignition off letting the night sounds in.

“Maybe they got tired of waiting and went on to bed.”

“They wouldn’t do that,” Lilly said as she stepped out of the car.

“Sure they wouldn’t,” he responded, right after she had shut the door.

Wade gathered all the mental strength he could find to face Lilly’s parents before forcing himself out of the car.

Lilly stood on the front porch and slowly turned towards Wade as he walked up stairs. “Something’s… off,” she said.

Wade absorbed the same weird vibe. Other than the streetlights filtering in through the huge oak trees, darkness surrounded the house. After a moment of neither one of them moving, he said, “Maybe we were supposed to meet them at a restaurant.”

“No, Mom said here.” She put her hand on the door knob. The door hadn’t been shut all the way; it silently glided open. After a pause, she looked at Wade with an expression of worry hardening her delicate face.

Lilly shook her head. “No,” she whispered.

He tried giving her a firm looking at, but still she shook her head.

“Fine,” he said through his teeth. He walked through the dark entrance with Lilly right behind him, holding onto his shirt. He waited a second for his eyes to focus, and then jumped when the light overhead snapped on. He turned to Lilly, and she shrugged her shoulders, her hand on the switch.

When Wade got a whiff of dinner, the silence and the darkness of the house didn’t add up. And then Lilly glanced past him. Her brown eyes narrowed but then quickly widened. Wade followed her stare to the destroyed living room area.

“Mom… Dad?” Lilly ran past him, stopping for a second to examine the living room.

But Lilly didn’t stop. She ran up the stairs calling her parents’ names, each time her voice a little more panicked. Wade chased after her, but as soon as he reached the top of the stairs, he heard Lilly scream.

Here are some links: