My Thoughts on Snow White & the Huntsman 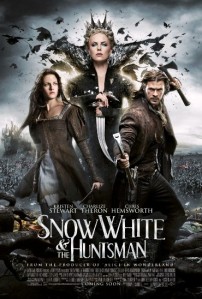 I wasn’t able to go to the movies and watch Snow White & the Huntsman. But I was so looking forward to the DVD, even though all I’d heard about it were bad reviews.

My husband surprised me with the movie yesterday, and I guess I’m crazy (more like a crazy fairy tale person), but I really liked it. I probably wouldn’t have picked Kristen Stewart as Snow White but for the time period and the darkness of the movie, I think it worked okay.

There were so many things that I loved about the fairy tale. I appreciate the story changes and additions; without them, it wouldn’t have been dark enough, and there would’ve been complaints from the modern audience saying Snow White shouldn’t have been so weak and why do all fairy tales have a damsel in distress that need to be rescued by some Prince?  (Well, they were written a long time ago.) The huntsman taking on a lead role was brilliant. (And I’m not just saying that because it was Chris Hemsworth… ahem.) I had to think a little bit about the kiss that woke Snow White, and again I appreciate the writers modernizing the characters but keeping the fairy tale. I think that the huntsman did love Snow White, but in a deep, unselfish, friendship camaraderie sort of way – and all of this allowed Snow White to be Queen – not princess.

I’m also happy that they kept a lot of the key Snow White ingredients: the seven dwarfs, the poisoned apple, the huntsman, the prince, the wicked stepmother, the woods, the “Bring me her heart!” The original fairy tale was still very much there! And the scenery was awesome – cool cool castle! I want a castle.

So there you go. Maybe I’m just a sucker for fairy tales—although I wasn’t crazy about Mirror Mirror —but I really liked it!

Here’s an interview I found about a possible spin-off http://collider.com/chris-hemsworth-snow-white-huntsman-2-sequel-interview/166823/