Ninja vs Pirates is now available :)

My new children’s book, Ninja vs Pirates is now available in paperback for $5.99 at Amazon.com

Are you Team Ninja or Team Pirate? 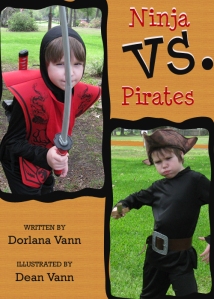 Step into the hilarious imagination of Riley and Richard as they use clowns, ghosts, poop, and jokes to argue who are the better warriors—ninja or pirates? Riley dramatically acts out his tale about how the ninja tricked the brainless pirates. And Richard draws pictures to get his point across: pirates were smart and inventive; the ninja were the real clowns! Will the boys ever agree? Or will it always be ninja vs. pirates? For all ages (especially 8-year-old boys)
Dorlana’s 8-year-old son, Dean, wanted his mom to write a book for him that had pirates, ninja, and jokes. Soon, the project became a partnership. Dean is the illustrator of PART II, model, and advisor on all things little boy.
For more information about the book visit About Ninja vs. Pirates page.