Each member of our group (women ages 24-48) draws a month and a genre/theme. Whosever month it is, gets to choose a book and movie in their category. (They do not have to be one in the same.)

The group has approximately 3 weeks to read the book and then we get together to eat, discuss the book, and then watch the movie.

Tailored for Trouble by Mimi Jean Pamfiloff (August 2016): Taylor Reed is no stranger to selfish, uncaring CEOs. She was fired by one, which is why she has created her own executive training program—helping heartless bosses become more human. So Taylor shocks even herself when she agrees to coach Bennett Wade, the cutthroat exec who got her unceremoniously canned.

Enchanted (2007) Directed by Kevin Lima and written by Bill Kelly (He also wrote “Blast from the Past”): The beautiful princess Giselle is banished by an evil queen from her magical, musical animated land and finds herself in the gritty reality of the streets of modern-day Manhattan. Starring: Amy Adams, Patrick Dempsey, James Marsden, and  Susan Sarandon 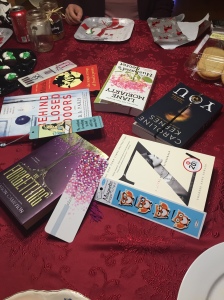 We met at my house this month. Everyone brought either book related or Christmas themed snacks, so we ended up with mulled wine wassail and a regular wassail, croissant pizzas, cucumber sandwiches, lots of cookies, popcorn, and peanuts, champagne and wine. We also had a secret Santa book and bookmark exchanged – (I was so excited to get Z: a novel of Zelda Fitzgerald by Therese Anne Fowler. )

Thoughts about the Book:

Well, it was my pick this month …  *clears throat*

No one liked the book. The author did not bother to add the plot promised in the synopsis. The writing was awkward and the story-line was unbelievable and cheesy. Here are some of the group’s comments:

“I didn’t realize it was so easy to get published.”

“Maybe this book was supposed to be a joke.”

“This was like a bad knock-off of Fifty Shades.”

“Her inner dialogue was annoying.”

“Why didn’t the author just make the book in 1st person?”

“I hated this book.”

Everyone had already watched the movie before, and we all pretty much liked it. We thought it was sweet, romantic, and funny.  We laughed a lot and enjoyed all the different fairy tale (Disney) references that I didn’t pay much attention to the first go around.

The sex scenes in Tailored for Trouble were gag inducing and were compared (unfavorably) to Fifty Shades.

Enchanted has tons of fairy tale references (Giselle’s Character is based on a lot of different Disney Princesses but mostly Snow White) and cameos from Disney’s fairy tale movies, such as:  Judy Kuhn the singing voice of Pocahontas, Jodi Benson who was the voice of Ariel in The Little Mermaid, and Idina Menzel who later sang the Oscar and Grammy Award-winning song “Let It Go” in Frozen.

You can find a list of Disney references here.

We noticed how Giselle’s wardrobe became progressively modern and when someone looked it up, it pointed out how Robert’s clothes became more fitting a fairy tale prince.

We also discovered that one of the women in our group knows all of the names of the actresses/singers who played Disney’s fairy tale princesses – crazy.

The Group’s Average ratings (out of 5):

OK, I’m just going to give the actual ratings from each of us:

I checked Amazon before making my book choice and Tailored for Trouble  had overwhelmingly positive reviews – which I really don’t understand, seeing as 6 out 6 of us – different ages and book preferences – didn’t care for it. I say skip the book.

Enchanted is fun for a lot of audiences: Disney fans, fairy tale fans, romantic comedy fans – If you haven’t already watched the movie, watch it. And if you have, watch it a second time to catch all the fun references.

Next month’s Book and Movie Theme:

Australia and we will be reading  The Light Between Oceans by M.L. Stedman

Hi! Welcome to my page. My inspirations are fairy tales, the supernatural, and classic romantic comedies. I like taking elements from fairy tales (characters, mood, moral, plot) and mixing them with a paranormal element and then dropping them in a contemporary setting.

Another RennFest picture. This one is of my son, and yes, that’s his real hair. Lol. Dressing up for the festival is one of the things that make it so fun! But it did get really hot. #texasrenaissancefestival #costume
I found an adorable broom shop, Swept Away, at the Texas Renaissance Festival shoppe 523b - I picked out a cute little broom and 2 colors of yarn, and then the broom maker hand-stitched the broom while I waited. There are a lot of superstitions tied to brooms. Like if they are hung over doors it will keep negative energy out - The brooms are also functional, but I found the perfect spot to display it in my lounge. Lol #sweptawaybrooms #texasrennaissancefestival #broom #witchesbroom #broommaker
Well, I was running this ad on bookbub and got at email stating it was suspended for profanity lol. Oops. I just thought it was fun. And totally goes with my story. No worries. I took it down and put up another. …………………..
Date night with the husband took us to Old Town Spring this week and to the restaurant/bar Prohibition where, you guessed it, their vibe is speakeasy – Great drink menu, the food was great, and the service friendly. I would recommend the wings!
I did some fun research this week for Potion, which led to the title, The Wand of a Fairy Godmother. Let me start by saying, I’m not a tarot expert, I’m still learning and rely on source material, definitions, and research for interpretation.
Received my bookclub book today - 😳😰 Nothing but Blackened teeth by Cassandra Khaw. #readyforhalloween #scarybook #bookclub #amreading #booksofinsta #halloween