The superstition references in Silverweed are a combination of my grandfather’s stories and an informative superstitions dictionary. 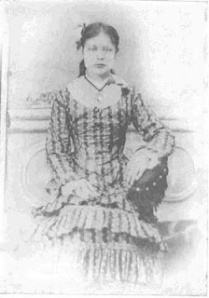 I’d never really been that superstitious, except for doing things like tossing salt over both my shoulders—yes, both because I didn’t know which one was correct. However, my interest sparked in 2006 when my mom told me about my grandfather’s childhood stories. Apparently, his mother (pictured on the right – my great-grandmother – I think I kind of look like her) died when my grandpa was five-years-old; it happened the day after she’d told him to stop shooing the birds away that had landed on their front porch, because it meant death.
My grandfather had also told my mom that one day he had watched the devil walking out in his Alabama woods, pitchfork and all. (You might recognize this from the first chapter of Silverweed.)

Around the same time my mom was reminiscing, I was writing the rough draft of the the Little Red Riding Hood inspired short story, and all of these memories set the entire mood for “Silverweed Muffins” which eventually became Silverweed the novel.

As I was writing the story, I researched superstitions. It took me awhile but I finally found a reference book I really liked, Dictionary of Superstitions by David Pickering. Even if you don’t need the book for reference, it’s interesting to see how our lives today are influenced by these superstitions from the past. BTW – the correct shoulder to throw salt over is the left one.

Read Chapter 1: Once Upon a Time
GoodReads Reviews

Hi! Welcome to my page. I'm a Texas author of contemporary novels for teens and adults. My inspirations are fairy tales, the supernatural, and classic romantic comedies. I like taking elements from fairy tales (characters, mood, moral, plot) and mixing them with a paranormal element and then dropping them in a contemporary setting.

Time for wine! #pinotgrigio #wine #winelover #whitewine #flatlay #flatlaywine #tulips
I was going through my mom’s pictures and found this pic me. Not sure of the exact date but late 1970s for sure. 😂 #tbt #tbthursday #seventies #oldpic #genx
I went with my daughters to get Tattoos! I’ve been wanting a writerly one for awhile and thought this would be perfect since I like to use fairy tales as inspiration! #onceuponatime #tattoo #fairytale #writerlife #writerlytattoo #amwriting #writerscommunity #writersofinstagram
I decided on an artificial tree this year. I went to like six stores before finally finding this one at Walmart lol. #christmastree #angeltreetopper #whitetree
The cranberry margarita at #lupetortilla was not too sweet and had the prefect amount of #tequila taste. A little expensive but worth it for a holiday treat. #margarita #houston #texmex
We ate at Paula Deen’s Creek House restaurant when we visited my daughter and family in Georgia over the Thanksgiving holiday. I wasn’t feeling well, so I had the salad and baked potato. But everyone said how great the fried seafood and chicken was. The patio was really nice. The service a little slow. #restaurantreview #pauladeen #pauladeenscreekhouse #pauladeenrestaurant #foodie